Powerful voices, electrifying energy and beautiful souls make Vancouver's SOUL SISTAHS a dynamic collaboration of Canada's finest R&B / Soul singers!! With the desire to create quality live music and to work amongst other talented women and respected artists, "SOUL SISTAHS" was inspired to generate diversity and opportunity within the local Vancouver music community as well as global entertainment markets. 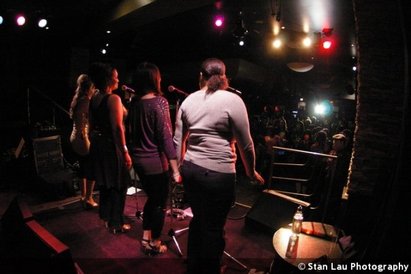 Born and raised in Vancouver, Jena developed a passion for "all things entertainment" at a young age and has never let go since.  During high school, she was honored by the Black Cultural Society of BC and received top achievement award for her contribution to the arts.  Jena received a full scholarship to Berklee College of Music's Performance Program in Boston Massachusetts.  Upon her return she met and co-founded the successful group "Shades of Soul" with Omar Khan & David Morin.  The group would secure a record deal and release their 1st single "Get With You" that quickly fell into heavy rotation on Vancouver's THE BEAT 94.5  Currently Jena writes, collaborates and performs every chance she gets working toward her highly anticipated debut album.  More recently she just returned from a 4 month tour in Singapore with HB Wild.  Originally she founded "Soul Sistahs" as an outlet to perform more frequently in Vancouver with the people she enjoys working with.  It has now turned into a full-fledge production in which she takes great pride, artistically.  Her sound and writing style is one that carries with her all of her musical influences, from r&b, pop, hip hop, jazz and country.  On all facets, Jena considers herself very fortunate to be able to do something she has loved and nurtured all her life.

Every so often a superstar is waiting to " BE " discovered- a star that is untouchable and appears to transcend all earthly boundaries. But, there is nothing about Tamara Rhodes that is untouchable, yet her music definitely says superstar. In fact, she is so touchable that you can literally feel the warmth of her broad smile. Her "home girl next door" charm resonates through a serenic flow of words that seems to invade your most private thoughts. It's the delivery of those words that is refreshingly calm and patient making you want to scream, "Take your time, girl!" You sense that she is not singing words, but experiences and the issues of her heart. Probably because she truly singing from the core of her heart. Tamara has the talent and ability to inspire millions of people.

With an authenticity in her music allowing her to communicate on a SOUL level, Jessi's audiences are inspired to resonate with her.  She elevates through positive thought, stirring souls, expanding minds and penetrating hearts.  Jessi creates space for rare intimacy and energy.   A warm mix of soul/r&b/reggae and her music's ability to reach any age, make Jessi Nicholson a new focus within local and global music communities.  Jessi is a proud "Soul Sistah" and will continue to perform with this very special group for as long as she is able.  Jessi holds a Bachelor of Music Education and continues to offer arts, education and entertainment services to the Lower Mainland & Beyond.  She also believes in the power of serving her community and especially young emerging artists.  www.jessikohoutek.com

Marie Hui, based in Vancouver, Canada, is a freelance singer, performer and songwriter.  As a seasoned performer, Marie is always in the moment - energetic and expressive, soulful and wholly authentic.  Her vocal expression is one that projects emotion, passion, positivity and strength.  When citing her influences, Marie's come from genres that include R&B, funk, pop and contemporary folk.

Since starting her musical career, Marie has grown to become a sought after performer for various bands and a singer for studio work.  Marie's musical experience includes performing in venues across Vancouver, touring with a 9 piece band in Macau (China) and Thailand, and writing and recording for a variety of production companies.

Currently Marie is co-leading two bands in Vancouver - Groove& Tonic and the Soul Sistahs.  She is gigging all around town, including Starlight Casino, Fairview Pub and the Heritage Hall on Main Street to name a few.  Marie has also secured her spot in the limelight as the Vancouver Whitecamps' resident anthem singer for the 2011 season.  www.mariehui.com

Christena Rich was born to sing! At age seven, she began singing in soundstage productions, and competing at music festivals in Penticton, B.C.  She began writing original songs from a young age, had a true passion to sing and desire to create any kind of opportunity to pursue her career. Christena continued as a recording artist and performer in Vancouver. “Without You”, co-written with producer Lin Gardiner and artist Zayne, was licensed for the movie “Delux Combo Platter” and published with BMG Bluesky Music Publishing in the U.K. Her music captured the ear of Rod Stewart producer Lauren Wild, now working on her solo album in L.A. with Mike Thompson (Eagles) and co-writing with Nicklas Sample. From the studio to the stage Christena joined “Soul Sistahs” and has rocked shows at lounges and clubs in Vancouver. With her powerful stage presence, passionate energy, and a voice that carries outstanding natural ability, Christena will be endlessly connected to music! Her lusciously sweet tone and soulful edge combine an artist the world is anticipating to know.   Christena currently resides in Los Angelas, California with her beautiful family.